2017/02/12 23:56
ハクソー・リッジ(2016年製作の映画)
4.3
"Hacksaw Ridge" is directed by Mel Gibson and stars Andrew Garfield, Sam Worthington, Luke Bracey, and Teresa Palmar. This is a biographical War drama film based on a true story about Desmond Doss, who was an American pacifist and serving as a medic during World War II. Because of his strong belief in Christianity and his trauma in his childhood, he refuses to carry a rifle into a hacksaw ridge but just take care of wounded soldiers there. Although temporarily gets charges of disobeying commandments from his officer, he keeps on holding his ground...Here is the point whether he can survive with no weapons but only medical things in a hacksaw ridge even if they let him go...
Finally saw this film on the Internet first and went to the theatre to see it on the big screen to make myself feel as if I were in the same situation. Mel Gibson finally came back to direct films from a long lapse. As you may know, he won a couple Oscar for Braveheart including Best Picture. Although I didn't really expect that Hacksaw Ridge would hit the big time as Braveheart did, it was a really well-written and made war film, only focusing on a medic used to be called the most cowardly soldier ever existed. Seeing him fighting with no weapons and helping wounded soldiers no matter which side the soldiers were, I was somehow shedding my tears from my both eyes. He gave me lots of courage and we must regard him as the bravest and warm-hearted solider or medic ever existed.
It took lots of time to get a permission from Desmond (the real medic) to make this film according to the director Mel Gibson.

Thanks for reading my review of "Hacksaw Ridge"! 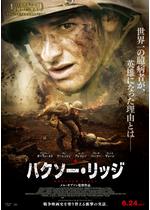